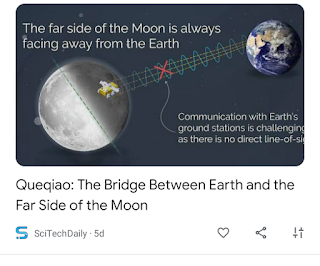 I wanted to elaborate on a few things this article didn't touch.

1)st sats are great and can offer more than just data relays . With enough of them you could do a moon or mars based gps like system that also provides high speed 2 way data links.

2)until someone wants to put that in orbit I think we should probably Focus on a more old fashioned solution. A ground based wired or even rf/ir relay system from dark side to light.

The size of the moon means there's less space around it to park a bunch of sats and or if a few mistakes are made the space junk problem would probably get out of hand quickly. AKA you could possibly wipe out every orbital slot you needed. Worse than that you could ring the planet and make it hard to put humans on because you might have to get through that debris field in a spacecraft.

It would be nice to see a global collaboration on Moon Mars and even Transit positioning and data relay systems.

I'm not sure how much her how little of a pipe dream that is but in my opinion that's the way to do it.

A system developed as a collaboration would likely be compatible system. Similar to how GPS works now where the more satellites you have in view the better you're fix, you could envision something where the satellites that help position on the moon have antennas pointed at space so any Craft on its way to Mars can use both the Earth's satellites and the Mars satellites to help calculate where it is in space on the way to Mars.

What's the Hold Up?

Clocks
if you're not familiar with GPS stay with me
Nav as we do it with gps on earth is largely dependent on extremely precise clocks.
Iirc gps signals encode the time they are sent and the position of the satellite into nice little packets of info.
The phone looks at it's clock and says this signal was sent at x time it's now y time... We know how fast the signal traveled so let's figure out how far from the sat we are. Then with a few more satellites doing the same it triangulates your location.
This only works with really really precise timing on the gps sats
To pull this off they put atomic clocks on them. Aka time is determined by decay of isotopes/ counting neutron emissions (Iirc)

Why's that work on earth but not space

Earth has this lovely magnetic field that helps keep everything in orbit shielded... They want me to put him in atomic clock in deep space is somewhat new... To us

Raw speculation but I wonder if Elon Musk has been forward thinking enough to consider making the v2 starlink sats with laser transceivers facing space as well as each other and or earth.

Tossing on a rubidium fountain.. Gucci