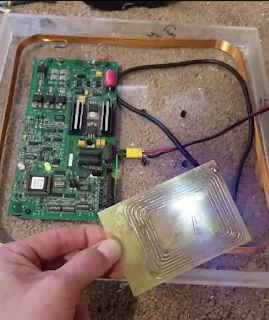 I was paid to produce a board that could emulate hid proxi cards.
What you're looking at (bellow) is a Proxi Max reader in a plexiglass case that I made.
What I'm holding up to it is version 2 of my emulator board. Where the chip should be soldered I've placed an LED instead.
Light emitting diode is the key to understanding how this works.
Any NFC or RFID application the reader actually sends out an AC field.
The LED is soldered across the ends of a coil made by a spiral on a pcb trace. The coil of wire attached to the reader and the coil of copper on the PCB form an air core transformer. Which passes the small amount of across the light emitting diode. Diodes are capable of chopping DC to AC, perhaps a better way to say it would be diodes don't give a s*** if you give them AC or DC you'll get DC out of them. Light emitting diodes happen to emit light mt  while they do that.

https://youtu.be/SUoj3h3sjAA
It's hard to see due to the camera but the LED in the top right blinks green indicating a valid read.
The concept for why the LED lights up is the same way we are able to power the microcontroller attached to the board. Integrated circuit engineers long ago realize that static electricity is a problem that can fry their chips. most modern integrated circuits contain static protection diodes on external pins. You don't see them because they're inside the black case hence integrated circuit... But it just so happens that on this chip the clock pins are protected by such diodes. The beauty is you attach the coil to where you normally connect an oscillator and when you bring it in proximity to the reader which is emitting an AC field the diodes not only clip the signal to form a perfect clock, the excess power is directed to VCC and zero or positive and negative where you normally powered the chip.
To put it simply you end up both providing the chip with power and clock just by attaching a coil.

I think some of the shortfalls could be overcome with clever use of plls but I'll discuss that or look into that later. It's beautiful in design but it lacks in the ability to brute Force proxy codes due to the fact that your clock cycle is at the same speed as the reader field and it's not enough extra clock cycles to work with. You just barely get to spit out the code by modulating the coil.
Powering it externally might sound like the solution
But it brings with it a problem. the problem is you need to be in phase with the reader's signal to produce a valid read.
https://youtu.be/8dNcWVOBK3Q
Here's the output of that read.

This was the daughter board I used to ensure reliable programming of the proxy emulator and a reliable read of the proxi reader.
it's a little bit embarrassing because I was still really new to some of the concepts I was working with but it's worth noting it worked.
The blue thin film capacitor erks me ..among other things/looking back at it now.
Some of you might recognize the header pins for what it was attached to. 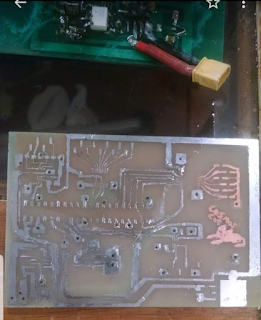 This was to replace that board. Then life hit. But not before I realized I exposed the pattern upside down on this board. Haste makes waste. So do my parents but that's a diff story. 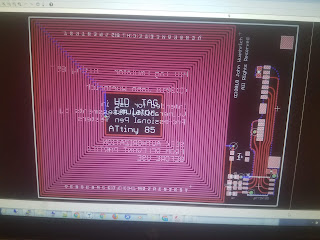 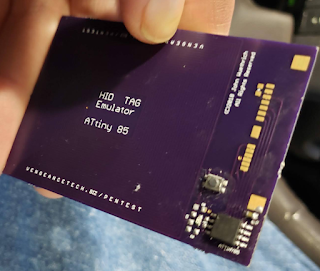 Raspberry Pi NFC and a Servo.

If you listen closely you might notice the servo sounds jumpy/jittery. This is because the rasberypi lacks a hardware PWM generator .aka servos take precise timing of highs and lows in the signals sent to them. The pi does this with its cpu..or trys to. this leaves a vulnerable to other things running on the CPU interrupting the precise timing or being in front of the command to send the signal at the microsecond it needed to be sent. Which produces the audible clatter from the servo motor. which actually produced enough vibration to knock the whole assembly off the shelf it was on
Here's the same thing with a cheaper reader and a different motor. Actually it's an electric door strike.
At the time I pulled this off the instructions were not there, there was no easy guide for using this reader with the Raspberry Pi. That was like 2016 I'm hoping the situation has improved. At the time I was translating little bits of Russian and mostly cobbling it together on my own.
https://youtu.be/8tvMvXmlAH4