CNN has lost its mind 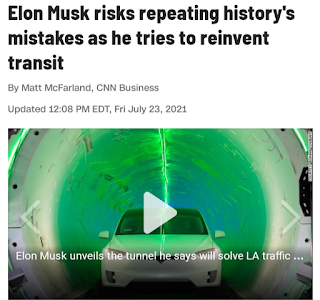 Where this comparison fails

Moses system apears to have been the main or only route to that beach.

It also wasn't aimed at reducing congestion. It was aimed at being a route to an elite place for the upet middle class and elite.

The tunnels musk's company wants to build are the size they are due to cost minimization studies. They did a bunch of math and modeling to figure out how tunnel size related to tunnel cost. It had fuck all to do with excluding buses

the writer seems to have neglected to realize it's a tunnel for electric cars for a similar reason.

Ie there's no suffocating and or noxious emissions from internal combustion engines. This significantly decreases the size of the required ventilation system. If you want to put a gas engine or heaven forbid a diesel bus let alone multiple of them... You all the sudden have a lot more cost and complexity in your air handling and ventilation systems. That or you have people dying of asphyxiation or getting carbon monoxide poisoning.

They could go even further with this. I'm not sure how well it would keep with carbon reduction but you could in theory turn off battery packs or run only cars with out them in the tunnel. They could inlay inductive Power loops into the floor. Which might further reduce ventilation requirements. I'm guessing their biggest issue for highest cost driver is the eventuality that a battery pack goes up in smoke in the tunnel.

I would bet they've done a lot of creative things or plan to with the automated driving aspects to further increase safety. What I see is they probably will implement some sort of say a car is on fire every car in front of it continues every car behind it reverses, because if you can with reasonable certainty insure only one car is on fire... This is all speculation though.

Back to why the comparisons fails

They compare the five to $7 ticket to the elitism of a road built to exclude buses and possibly the only or one of very few routes to the beach.

Without realizing that this is built so everyone who rides it takes away from a car on an already bumper to bumper route.

Ie everyone who pays for their ticket on the boring company express tunnel is making the normal route that much faster for everyone else. (By fact or one less, two less... 100 less cars on the existing car and bus route)

This feels shit in so called journalism mind numbing.

when you tear down ideas like this you literally become the reason none of us can have nice things. When what you're tearing down probably would have been nicer for all of us regardless of race or class

Not a huge achivment by any means. But made life better for a client.  A perspective client approached me with an issue. His solution for charging his phone via USB on his bike was taking up too much room under the seat
1 comment
Explore More»

Do you have a lawn tractor you use to plow snow? Ever wondered if you could make a manual snow plow attachment into a push button? A friend of mine had a riding lawn mower and snow plow blade attachment. Every winter he used the riding lawn mower to plow the driveway. The plow was a kit that bolted on the front of the lawn tractor and it had a mechanicaly actuated adjustable snow plow blade. The issue and this project came about when the arm to adjust the snow plow blade broke. I had just bought a mig welder. I had also watched linear actuators capable of handling 300lbs of force drop to $25 on ebay.  Here's what I came up with for converting a riding lawn mower snow plow into an electricity adjusted lawn tractor plow. Repair  The lawn tractor snow plow kit had seen better days. The fork that attaches it had bent /deflected and spread. I used a map gas torch and a bench vise to squeeze the tongs back and then welded some L channel angle iron on the sides. Less Play I also tack weld
1 comment
Explore More»