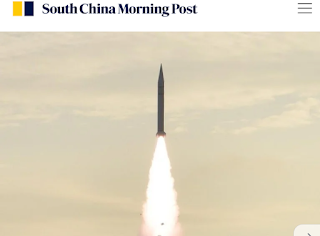 It's basically the Russian hypercapitating torpedo but they intend it through the air.

Another way to look at it is they make bow shock on purpose. Bow shock is what happens to spaceships returning as well. It's actually exploited to require less heat shield on vehicles such as SpaceX starship and most space capsules. Basically as the vehicle hits the atmosphere it's going so fast that the air in front of it can't get out of the way. It ends up creating a little compression bubble and keeping the heat off of The Craft.

China intends the opposite if I understand correctly. Basically boil the air away with an ir lazer to reduce drag on the top.

Where the two concepts come together is this basically ends up forming a boundary layer bubble around and projected in front of the missile.Which should reduce the friction through the air.

I woudnt doubt their main problem is how the fuck do you power said laser without making a significantly larger vehicle. Followed by the secondary problem of flight control sans usual control surfaces. Which leaves something like rcs ports, spacex like fins or maybe something like a gimbled lazer on the front.

The theory on the last bit is choose where the air vaporizes in front to steer it.

Regardless of the specifics its a neat concept.

I wonder if this will actually be applied to submarines or torpedoes as well.

The other potentially nasty part of this is what happens to radio waves or radar waves when they encounter plasma? Off to Google radar return from plasma cloud.

The bad in detection:

So yes it does slightly make them harder to detect.

The good in detection

Although I would bet that today's phased array antennas and sensing systems could detect the plasma itself. But now I'm off in the land of speculation.

I do know  know there's also been a lot of developments in optical sensors and terahertz rf tech. I'm guessing it's well within the capabilities of today's military to detect the plasma cloud but I wouldn't expect anybody to give you a straight answer on that.